Sleep And Disabilities: Everything You Should Know If you are a person with a physical or intellectual disability, chances are the condition affects your sleep. The same thing goes for anyone who’s responsible for caring for a person who’s living with a disability.

This piece will cover the research on intellectual disabilities, physical disabilities, and sleep in both adults and children. It will also investigate the link between autism and sleep problems and address some of the sleep-related challenges that caregivers may face. Finally, we’ll cover some sound strategies for addressing sleep issues linked to disabilities.

Links Between Sleep Problems And Disabilities In Adults

According to the University of Washington Rehabilitation Research & Training Center (RRTC), 40% of adults with disabilities report experiencing long-term sleep difficulties.

Common sleep disorders within this population include insomnia, excessive daytime sleepiness, and narcolepsy (falling asleep very suddenly during the day).

Research also suggests that adults with disabilities are not getting enough sleep.

Many caregivers can experience caregiver burnout, with symptoms that include fatigue, depression, and insomnia.

According to the Child Mind Institute, parents and caregivers of children with disabilities may be more likely to experience anxiety, depression, insomnia, and fatigue.

One 2017 review of literature evaluated the sleeping habits of parents of children who rely on medical technology, such as feeding tubes, insulin pumps, oxygen masks, and ventilators. These caregivers got significantly less sleep than the caregivers of children without disabilities, and the researchers concluded that these caregivers were “at risk of acute and chronic sleep deprivation, psychological distress and impaired daytime function that may threaten their capacity for sustained caregiving.”

Other research from the Family Caregiving Alliance suggests that around 41% of caregivers say they are regularly woken up at night by the care receiver.

The Alliance strongly recommends that caregivers seek respite when they are able to do so. Options include seeking assistance from family and friends, hiring professional in-home assistance, or speaking to social workers about respite options in your area.

“Don’t wait until you are exhausted and overwhelmed,” the Family Caregiving Alliance says. “Respite is most effective if it’s used early and regularly. Even short breaks make a difference.”

Links Between Sleep Problems And Disabilities In Children

In an academic study published in a 2006 issue of the journal Physical & Occupational Therapy In Pediatrics, researchers examined the sleep habits of 178 children with physical disabilities such as cerebral palsy, spina bifida, and muscular dystrophy, as well as 69 children without physical disabilities. The children’s caregivers completed surveys about their children for the study.

Many of the children in the study had used adaptive equipment at some point during their lives, mostly to “promote musculoskeletal alignment,” and many caregivers said this interrupted the children’s’ sleep or made them uncomfortable during the night. “Many caregivers were concerned about their child’s safety and comfort when sleeping and the negative effects of poor sleep patterns on their child’s general health and participation in daytime activities,” the researchers concluded. The study’s authors called for physicians and other health professionals to recognize sleep problems in children with disabilities and work together with families and caregivers to find sleep solutions. 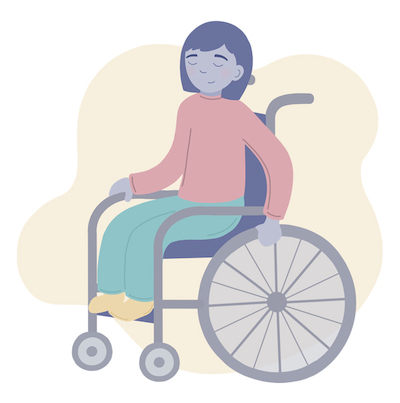 Another study, which was published in the March/April 2006 issue of Research in Developmental Disabilities, focused on children with an intellectual disability (ID) such as autism, Down syndrome, or Prader–Willi syndrome. “The prevalence of sleep problems in the disability groups was at least four times higher than for children [without disabilities],” the researchers found.

Common sleep issues in children with intellectual disabilities included trouble settling down at night, co-sleeping with a parent or caregiver, nocturnal incontinence, and waking up very early in the morning.

The parents interviewed in the study said that they worried about their children’s’ sleep issues because they affected the child, but also because the sleep issues could disturb other family members’ sleep at night.

According to the Centers for Disease Control, around 1 in 59 children have autism spectrum disorder (ASD), defined as “a developmental disability that can cause significant social, communication and behavioral challenges.”

The University of Utah Health website estimates that around half of children affected by autism spectrum disorders (ASD) also have trouble sleeping — but the exact link between autism and sleep problems is not clear.

“One theory suggests a malfunction in the body’s circadian rhythm, which is the body’s 24-hour biological clock, and the inability to regulate the brain’s production of melatonin,” said Dr. Patricia Aguayo, an autism disorder specialist at the University of Utah Health. Common sleep issues in children and teenagers with ASD include trouble falling asleep and waking up often in the middle of the night.

If you have a child with ASD who also has sleep issues, the Autism Speaks website offers a number of suggestions. According to the site, the following things can help children with ASD sleep better:

“Sleep is a complex process that involves many parts of the brain,” the University of Washington Rehabilitation Research & Training Center (RRTC) explains. “For this reason, and depending on a person’s specific disability as well as their general sleep habits, many different kinds of sleep disturbances can occur in persons aging with a disability.”

Here are some common sleep disorders that may affect people with disabilities, and what the symptoms look like.

Chronic sleep deprivation can lead to a number of health problems. According to Harvard Health, consistently not getting enough sleep is linked to:

Sleep apnea is a condition where your breathing starts and stops while you are asleep. There are three separate types of sleep apnea:

According to the National Sleep Foundation, one in 10 American adults suffers from Restless Legs Syndrome (RLS), also known as Willis-Ekbom Disease. Symptoms can look like any of the following:

Hypersomnia is either excessive time spent sleeping, or excessive feelings of daytime sleepiness. The University of Rochester Medical Center website says the following symptoms are indicative of hypersomnia if you experience them for three weeks or longer:

Tips For Sleeping Better With A Disability

Helpful advice on how to improve your sleep if you are living with a disability depends on both your condition and the sleep problem you’re having. For this reason, it’s always important to consult with your doctor.

If you have an intellectual disability or a physical disability and have the symptoms of a sleep disorder such as sleep apnea or restless leg syndrome, here are a few helpful tips:

Following a good sleep hygiene routine can be helpful for people with an intellectual or physical disability who are struggling to obtain high-quality sleep. Here are some recommended sleep hygiene habits:

The Penn Sleep Center at Penn Medicine recommends Cognitive Behavioral Therapy (CBT-I) as the “first line of defense” in insomnia treatment. “There is a large scientific literature that shows that behavioral interventions are as effective as medication and, unlike medications, produce durable results that last after treatment is discontinued,” the website explains.

There are tons of natural remedies out there that people say really work to help them fall asleep and stay asleep at night. (Of course, it’s important to do your own research and consult with a medical professional to see what might work for you.) A few supplement options include:

For instance, some sleeping pills come with a risk of you becoming dependent on them, and there are a host of potential side effects including headaches, feeling dizzy or lightheaded, feeling nauseated, diarrhea, feeling extremely drowsy, increased risk of sleepwalking, and having problems with performance or memory during the daytime.

Experts agree that sleeping pills should be considered a last resort to combat insomnia.

Some caregivers know they aren’t sleeping enough, but others don’t actually realize they are sleep deprived. When you’re caring for a loved one, it’s easy to get so caught up in caretaking that you forgot to think about your own needs.

Research published in 2018 analyzed the sleep patterns of 43 caregivers for people with dementia and found that almost 92% of the caregivers slept poorly, woke up frequently, and slept less than six hours nightly.

Sleep deprivation can take a serious toll on caregivers (as it does on anyone!). Consistently not getting enough sleep can lead to trouble concentrating, mood swings, excessive tiredness, reduced physical or athletic performance, impaired cognitive performance, and a higher risk of developing serious health conditions, among other negative effects.

So how can caregivers increase their odds of obtaining the sleep they need while maintaining their responsibilities to the person in their care? Here are a few strategies:

Every caregiver’s situation is different, and a caregiver struggling with sleep deprivation should speak to their doctor about potential ways to counter it.

Experts aren’t exactly sure what causes the link between disabilities and sleep trouble, but plenty of research shows that people with disabilities are more likely to have sleeping problems than people without them.

That goes for both physical disabilities like cerebral palsy, spina bifida, and muscular dystrophy and intellectual disabilities like Down syndrome and autism. There is an especially strong link between autism and sleep trouble, but we need more research to understand what causes that link and how best to resolve it.

If you have the symptoms of a diagnosable sleep disorder, speak to your doctor about your concerns to see what they recommend. If you have less defined sleep issues, such as trouble falling asleep or staying asleep, waking up multiple times in the night, or waking up too early, it’s possible that lifestyle changes and following a robust sleep hygiene routine could make a difference to your sleep quality.